Knee tremblers part 2 - the lunchbox that got away!

Back in 2016 this neglected blog featured a piece on "knee tremblers", those special seabirds that leave you trembling when they appear on a seawatch - see the original post here. For these are the Pterodromas, to me the ultimate seabird - mystical beasts that appear sweeping through and (usually) are gone all too quickly. My lack of seeing one for a while resulted in another trip to Madeira in 2018, where some great encounters were had (see photos of their two species below), in at times, very rough seas, see the write-up  here.  The same year I even saw another Fea's type Petrel at Pendeen, found by Steve Votier, apparently the site's first accepted one - which I find very strange given its position and history of amazing seabirds! So up to 2020 I've seen eight in UK and Ireland of which I found three, co-found two and latched onto three others found by others (including one found by my dear other half and seawatching companion Del); they included accepted firsts for Devon, UK and County Mayo, Ireland. Since 2015, in Devon there have been another two Fea's/Desertas I missed, both at Berry Head and both times I've been down-stream at Start Point when the phone call has come through "heading your way and you'll definitely get this". Yes, and both times I didn't!!

I still tuned into the great vibe coming from Berry Head of their last one (25/08/20) as the assembled group enthused on their bird, with seawatching mate Dave Dawe deservedly welcomed to the 'I've found a knee trembler" club and the sheer elation of those assembled seeing it; including a delighted Mark Bailey who just got on it before it sailed off around the corner. Not surprisingly Perry Saunders and myself at Start were rather deflated, despite clocking 11 Great Shearwaters, way exceeding Berry Head's total! 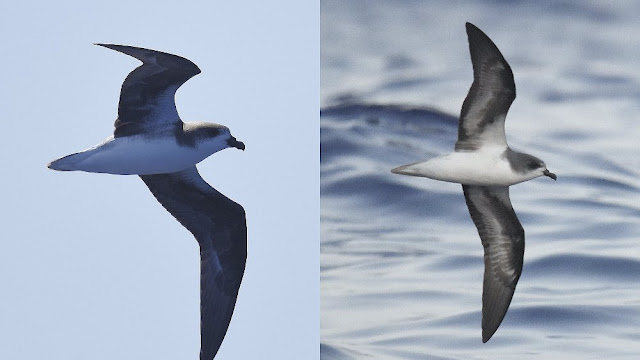 Above the larger more robust Desertas Petrel on the left, the more delicate (Manx-sized) Zino's Petrel on the right - Madeira 2018. When compared, this Zino's has more white in the underwing coverts (more pro-feature for Zino's); also its more compact and shorter-necked, and has a slimmer bill (a similar bird should be a future addition to the UK list as a great candidate was seen on a Scilly pelagic in 2020!). Desertas and Fea's are inseparable in the field, but as the above 'Desertas' photo was taken off the Desertas Islands, Madeira, its a pretty solid bet it was one.

But was 2020 over for strange seabirds? No what a year! So to recap there's been a White-chinned Petrel in Orkney, Short-tailed Shearwaters Ireland and France, Flesh-footed Shearwater Azores, Zino's Petrel Isles off the Scillies, a handful of Fea's/Desertas Ireland/UK/Spain, yet another 'Band-rumped' Petrel Cornwall etc. Then take a deep breath, recently at the famous  Estaca de Bares a Great-winged Petrel!!! With supporting cast of two South Polar Skuas,  two Fea's type etc etc, in a watch that must go down as one of the best ever!

Anyway, I again had the "knee trembler" moment in more ways than one! On 27/08/20 a rather uninspiring forecast had me arrive at Berry Head for a seawatch at 12:00, winds had been due south all morning and forecast to strengthen and go more south-easterly with some rain. OK for some skuas, may be I thought? On arriving at the watch point, there was already a good passage of Manx taking place and a close Sooty in with them, then a European Storm-petrel. Dam I thought to myself, should have come down here earlier this is quite good! Manx passage increased another Sooty sailed past and a few more stormies, the wind was getting up and starting to rain. I moved a few metres to the south of the watch point for more protection as the wind was now approaching gale south-easterly and the sea very rough. Manx were pouring through sheering up and as I scanned with binoculars, sheltering under my well-seasoned brolly, what was that?!! I picked up something very different rise up amongst the Manxies. I started to shake as it was clearly something very good and not seen by me before. Wings were a bit more bow shaped, with a striking black & white underwing pattern not matching Manx, more thicker dark to towards the leading edge, was that a black ulnar wing bar?! I then convinced myself I'd got a Black-capped Petrel and rather stupidly started looking for features of Black-capped, by now just managing to get it in the scope as it was heading away from me - I was really shaking by now. But no, no big white rump, no isolated black cap and this bird was barely bigger than a Manx - too small. Although dark above, I got the impression of the white on the face and up to the forehead giving it a white highlight on the front end, and Manx like saddle-bags that joined, both very unlike Manx! The bird had gone and I'd eliminated my first thought of Black-capped Petrel. Must have been a weird Manx I told myself, but I was not happy with that scenario, I've seen 100000's of Manx and never anything like that before. I rang Mike Langman who was thinking of coming down to say seawatching was good and I'd had a weird 'Manx' I'd tried to turn into something else.

Anyway before I could give it much more thought and had written the briefest notes, the second knee trembler moment happened. The wind just suddenly shifted through 180 degrees to north-northwest, at that moment my brolly blew inside out and four+ (carbon fibre) stays snapped and I was blown off my low three-legged seat. The wind strength was nothing like I'd experienced before, this was dangerous and I feared going over the edge. A north-westertly hits our normally protected quarry/cliff from the wrong direction and amplifies it. I was laid on the ground grabbing what I could, scope and tripod chucked on the ground and held on to my rucksack. Sandwich box and box containing items for making tea or coffee (essential long-haul seawatch gear) were both blown out to sea before I could grab them. Steel flask also blown out of sight towards the edge and disappeared. I then proceeded to crawl dragging my rucksack and crouched in the corner, while being hit by a deluge of water. This was not pleasant! All thoughts of 'the bird' had gone, I just wanted to salvage what I could and survive! I sat it out for around 30 minutes and the wind started to drop. Wow I was lucky (I recovered my flask at least that had wedged under a rock, just stopping it going over)! Had this been a Berry Head full-house with folk sat on big chairs, much of it would have gone out over, hopefully with occupants baling out first.

When I got home I looked at the data from the weather station on top of the headland, which showed a dramatic change in wind direction, southeast 40mph suddenly around 70mph north, as it went around in-front of torrential rain wind speed felt even higher! Data in knots (x1.15 for mph). Yes, 70mph is violent storm, felt like a tornado, with no protection in that direction at Berry Head! Later on in the evening after the storm, ML walking on top of the headland said, most of the cafe's tables and chairs had been blown all over the place. 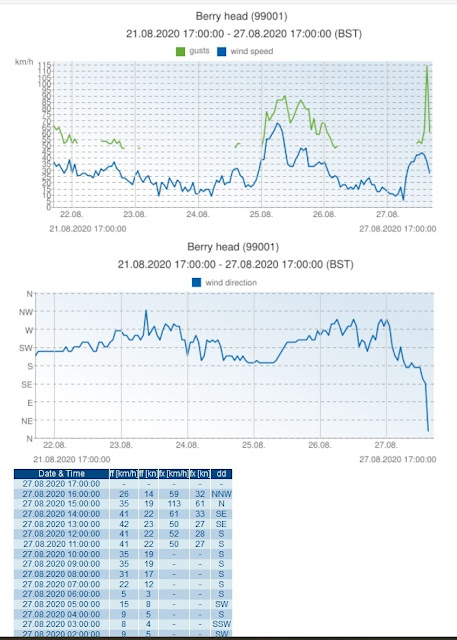 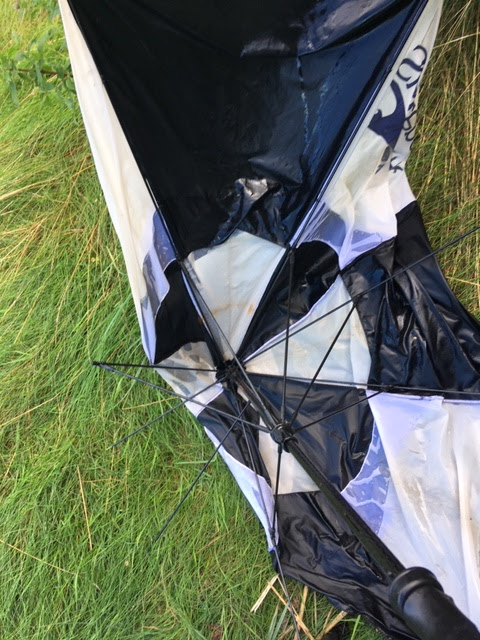 Well, I finally got around to looking at my numerous seabird books and you know what? Why didn't I think of Bermuda Petrel. It would explain the underwing pattern I saw and why I was thinking of Black-capped, BP can show a thin white rump (aka joining saddlebags) and the forehead and face gives it a white front to head look. Also Manx sized, if not a touch larger. Now on one pelagic off Madeira I remember a Zino's turning up and then a Manx and some participants thinking two Zino's as both shot around together and they were close-ish. Given the conditions at Berry Head that day, picking out features and different jizz was not easy, it was certainly very different to a Manx,  yet I've not enough on it to submit; and from experience very rare seabirds need very good notes and photos to get accepted - now if only ML had been there to help! Of course for me its another one assigned to the should have done better bin, like the brolly - no I rebuilt that with spares from another wreck, so it can fight another storm and so can I!