How time flies, here we are in 2020, at the time of writing I await the Devon Bird Report 2018 to arrive hopefully in the next month or so. For a few reasons recently I was prompted to pull out the 1998 Devon Bird Report to look something up (more below) and its very interesting looking back! 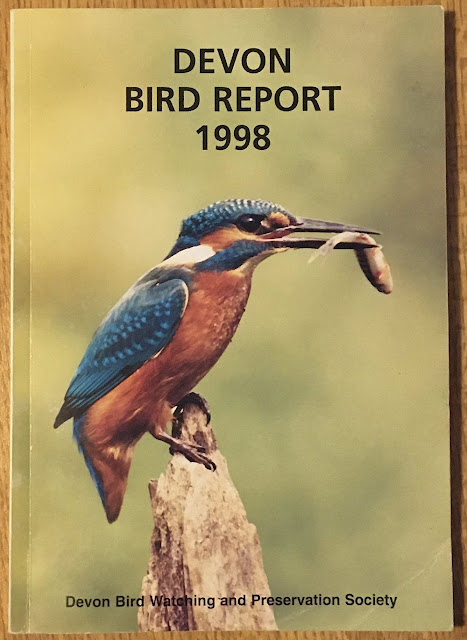 Like DBR 2018, 20 years ago the cycle of the Devon Bird Report (DBR) had drifted, so DBR 1998 actually came out in 2000 - realistically a year behind. For many that have never been involved in these reports, they may not realise the amount of shear graft that goes in, from the writing team, particularly the editors.

DBR1998 is much smaller than the present reports which up-sized physically in 2007, personally I prefer this smaller size, it fits my bookcase more easily. The then editors were a Dave Glaves (DJG) and Mark Darlaston! (MD), who at the time both worked full-time as scientists for the Farming and Rural Conservation Agency - so this was all done in their spare time, evenings and weekends! DBR 1998 was the last of their trilogy having taken over as editors for the 1996 report, effectively picking up the pieces of a crisis; when the DBR 1996 was literally pulled from the jaws of the printers as it was not up to standard. A bad time for DBR, as when the 1996 proof from the printers was seen by the section writers, it was considered not fit for publication or going out to the membership, so needed a re-edit / rewrite and DJG and MD drew the short straw and sorted it.

Opening the front cover of DBR1998 we see some familiar names, the recorder was Mike Langman and many of  the records committee and section writers are still about today. Sections appear more succinct and consistent in style between writers than in recent DBRs, down to a combination of factors. Despite being small in size the report has a gazetteer, edited to match the site names contained within the sections, very useful. Recent DBRs are 50+ pages bigger and lack a gazetteer!

One thing that is very apparent is the quality of photographs - as pre-digital, photos submitted were on slides or scanned from prints and this shows! Certainly one aspect that has changed dramatically with recent DBRs for the better, however, there was far more artwork in the older report that nicely supported the text than recent times.


Notable birds, the 1997 Semipalmated Plover reappeared at Dawlish Warren, there was a a drake Bufflehead at Roadford and a white morph Gyr Falcon at Wembury. The latter site also hosted a remarkable record of a Long-tailed Skua 4–10 April, described as a moulting sub-adult, however, looking at the photo now is it not a moulting winter adult?!

For a seawatcher 1998 appeared a fantastic year. In September there were a whooping 1771 sightings of Arctic Skuas, including a day record count of c600 on 06/09/98 at Berry Head - surely never to be exceeded. Also due to deep low pressure systems extending way down to the south in early 1998, we saw a genuine January Arctic Skua and European Storm-petrels. Tor Bay also hosted impressive assortments of wintering ducks, divers and grebes; seemingly more diverse than in recent times.

What about Balearic Shearwaters? At the time called 'Mediterranean' Shearwater and DBR1998 states the county record falling with 78 passing Berry Head on 07/09/98, in 2018 Start Point broke the record with 610 on 18/09/18 (8x the number!). Balearic numbers have changed dramatically off Devon!

1998 was a notable seawatching year and for me for many other reasons, how time flies!